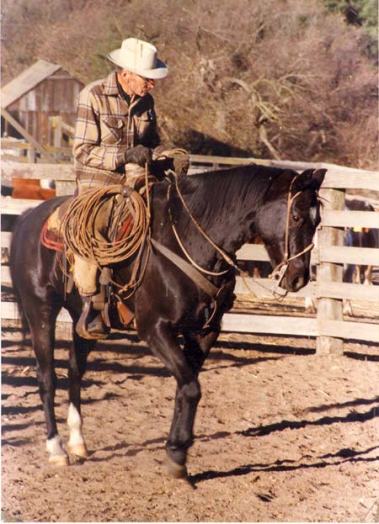 This spring I sprained my ankle getting on a squirely horse from a fence.  He was straight and right under me, so I threw my left leg over him and rubbed him a bit.  He was sort of tight but seemed ok, then suddenly flew backward.  I was safely on the fence of course, and was able to roll his hind end away and keep him with me, but in the process, I rolled my right ankle in the fence and sprained it badly.

I’ve limped along for months, and while it hasn’t completely healed, I’ve been a combination of too stubborn and too broke to go to a doctor and have it checked out.  But that’s beside the point.

My point is sometimes walking around is not my favorite thing, and chasing a horse around in the pasture to catch him up is not so easy, and walking a mile or two to get my horse handy in his groundwork is not that great either.  I discovered quickly which of my horses operated on a feel and which ones didn’t.  I discovered where I had been cutting corners and where I had been relying on strength and pressure to get a horse to work with me.

At the end of one day, I learned a lot about horsemanship.  I wanted all my horses to work on a float and to help me out, to walk slow with me, to lead right up to me so I could get on, to come and find me in the pasture so I didn’t have to hobble around, and to hang on and wait while I gimped up into the saddle.  What’s important to you when you’re feeling well is an urgent priority when you’re not 100%.

I learned to work with my horses in such a way that they understood and were willing to fill in a little where they were able.  You can’t force cooperation on any horse, and you certainly can’t do

minate love and respect into any horse.  You can put enough heat on a horse to get what you want, but when you’re tired, weak, down and out, hurt, or old, the same methods that got you what you wanted are no longer viable.  So start now, while you’re on two good legs and young, and work with your horses so you can limp along and lean on them for support.

One of the most amazing men I’ve ever heard of, Bill Dorrance, rode right up until he died at the age of 93.  The photo up above is of him, sitting tall and riding on a float up in the bridle.

The child below inspires me as well.

Children are amazing, sometimes reaping better results than educated adults with formal riding training.  They know what they want, and with their innocent expectation, produce a pure and honest result.  They lack strength, and often they lack timing and technical skill.  But they often have just that missing ingredient we as adults often lack, despite our systematic education.

What lacks in many of us is an openness, and pureness of intention – uncluttered by rational thought.  I think the word “feel” is often mistaken for a type of touch, though it can be, but intention is the most important part.  As Bill Dorrance said in his book, True Horsemanship Through Feel:

“Horses are intelligent and they can make decisions. This is the reason that they can sense what a person wants them to do and will try to understand a person’s intent.  Through his natural instinct of self-preservation, a horse will respond to two kinds of feel that a person can present. He will respond to a person’s indirect feel, which means that he will either react to or ignore a person’s presence – and how a horse responds depends entirely on the person.”