It was cold, wet, windy, and almost a full moon today (some of you may not see the correlation, and maybe I’m nuts but I swear my horses are way weirder around that time).  My horses were all a little off, but having a foundation to fall back on, most of them worked through their antsy, jiggy, snorty phase and fell right back into the norm in no time.  Jack wasn’t so lucky, and since we’d only had a few short sessions together, he was like a nuclear meltdown wrapped up in gunpowder and lit with a match.

Catching him went well, and though he snorted at my halter and me in all my big, ugly rain gear (I must have looked like a giant, orange monster in my rain coat and rivers of rain running off it into my boots), he offered his nose to be haltered and lowered his poll while I tied the halter knot.

When asked to go right, his mind shattered like a snowglobe in a wind storm, and I lost all connection to Jack.  If you’ve read my article on loading him in the trailer when I first met him, you’ll understand some of the behaviors he reverted back to – holding his breath, dumping his shoulder,
and bowling as fast as he could right over the top of me.  When he gets to this frame of mind, pressure on the lead rope, pressure from me, pressure from anything absolutely created the opposite effect – he comes toward it, hard and fast.  The ground was wet and slippery, my neck and shoulder were not up to par from a spill I’d had the other day, and I needed an idea fast before things got ugly.  Saddling up Dee to work him off of was out of the question with the footing being this slippery, and not to mention I didn’t have time to walk back to the barn, put him up, get her out, and start over, without getting myself and/or him in a precarious situation.

Having a construction business, my landlord had many flatbed trailers parked nearby.  I found one that provided a nice platform for me to stand on and wasn’t too slippery.  With me safely up a few feet, and Jack looking up at me, snorting, puzzled, but still antsy, I thought I might have an advantage.

I asked him to just lead up to the left while I walked the edges of this trailer, which had 4 sharp-ish edges.  In his frenzy, he began running off, dropping his shoulder, until he knocked his front legs into 3 out of the 4 corners.  At first, he went faster, running blindly from fear and pain, and then he seemed to wake up and feel the lead rope.  I tried to tell him in the best way I could, if you feel my lead rope ask you to lift your shoulder and move over, you won’t run into those corners.  Stay with me, and I can help you.

He stopped, untracking his hindquarters pretty nicely, and faced me. I rubbed him between the eyes and felt him for a moment take comfort in that.  This time when I asked him to lead to the left around the flat bed, he swiveled his left ear toward me, asking, what do I do?  I provided direction, asking him to slow around the corners, step over, and then walk straight down the long side.

I stopped him again, rubbed his neck, and since he was willing to stand and relax, I stood and relaxed with him.

Next, it was time to check out that right side which was so unavailable today.

With the little bit of leverage and added height that I had, asking him to go right was much easier and safer for me.  On the ground, he’d get bigger in the front end and that hard look would come over him while he prepared to dive straight over the top of me.  Up on this flat bed, that wasn’t an option, unless he climbed

up there, but I was banking on the fact that he was afraid of it and would want to go away from it.  I also had a better shot at pushing on his right eye (figuratively, with my energy and lead rope of course, not literally) to send him to the right without him changing eyes and shoving his head at me.

At first, going to the right involved running into a lot of those little edges and speeding up without feeling back to me, but in to time he softened up and was wanting the same kind of help as he got on the left side.  His eyes changed and his ears pricked up, and soon he was leading up nicely on both sides, and lifting his shoulders with better balance.

I was pretty happy to have Jack’s mind searching for me, and happy he accepted the comfort I was able to give.  He stayed with me all the way back to the pasture where he rejoined his herd, a little more certain of himself than he was before. 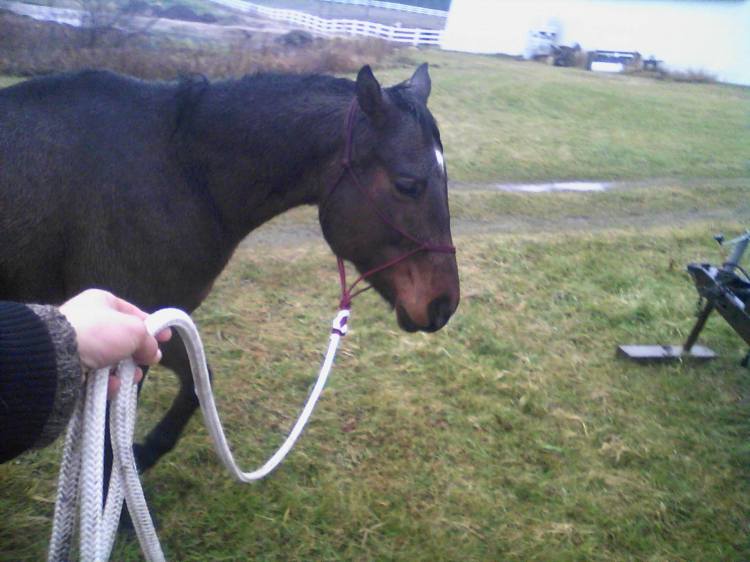 Jack shows me a nice soft eye and slack in the lead rope.  What a nice spot to quit this guy!